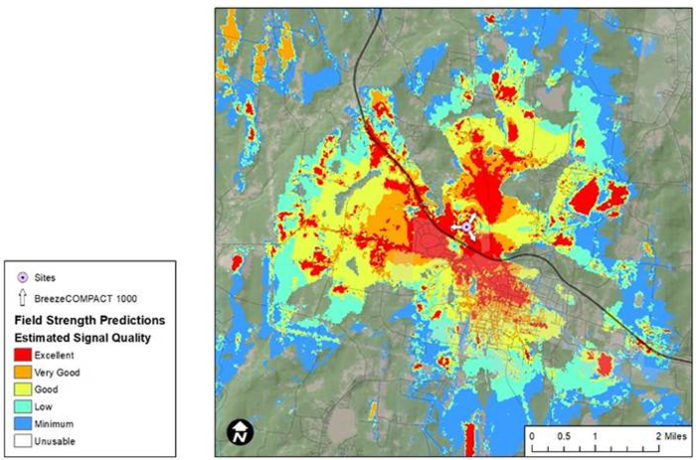 MONTICELLO – Legislators in the County’s Management & Budget Committee tentatively authorized a wireless broadband pilot project that, if successful, could ultimately bring high-speed Internet access to most of the unserved/underserved portions of Sullivan County.

The resolution, if approved by the full Legislature next Thursday, will allow the County Manager to enter into a $160,000 agreement with Integrated Systems of Victor, NY, a current County technology vendor, to undertake the necessary work to mount equipment on the County’s recently erected emergency communications tower next to the new Jail and Sheriff’s headquarters in Monticello. Once operational, this equipment will transmit and receive data at broadband speeds in a roughly four-mile region surrounding the tower, including portions of the Village of Monticello. Through a local development corporation to be created by the County, the service will be provided to paying customers, albeit at anticipated rates lower than existing providers.

“Sullivan County is not looking to compete with current Internet service providers as much as we seek to create a cost-effective and extremely useful solution for those unable to either afford or obtain high-speed Internet access,” said Chief Information Officer Lorne Green, who as leader of the Division of Information Technology Services (ITS) has spearheaded this initiative. “I thank the Legislature for sharing – and funding – this vision of vastly improved broadband service.”

“Without the expense of miles of wiring and with the ability to transmit and receive up to 100 Mbps even in nearby valleys, broadband wireless holds the promise of resolving ongoing concerns not just for residents and businesses but for County purposes, as well,” said District 1 Legislator Scott Samuelson, chair of the Legislature’s Management & Budget Committee.

“This initiative demonstrates this Legislature’s commitment to the State’s ‘broadband for all’ goal,” said District 9 Legislator Alan Sorensen, who represents much of the Village of Monticello and Town of Thompson, where the pilot project will kick off next year. “And if it proves to be as transformative as we think it will be in the Monticello area, we’ll expand it to every County-owned tower, so that the majority of Sullivan County’s citizens and business owners can benefit.”

“Broadband is critical for economic development,” noted District 8 Legislator Ira Steingart, whose district will also be involved in this experiment. “It’s desperately needed throughout Sullivan County, and this is a great first step.”

Broadband wireless service works like cell service. Geography, foliage and buildings all can degrade or interrupt signal strength. Integrated Systems, which will install the hardware and software, has estimated coverage to extend to approximately 5,500 potential customers (see map below).

A four-sided antenna will be installed approximately 250 feet up the tower next to the new Jail, off Route 17’s Exit 104 in Monticello. Once fiber-optic cable is run to that antenna, it will be made operational for testing.

After testing is complete, a County-created local development corporation (LDC) will be responsible for managing, marketing to and growing the customer base. While service rates are anticipated to be cheaper than those currently available in the area, the goal is to use the revenue to expand the service to other towers and regions of the County, so that the LDC is self-sufficient, requiring little to no further taxpayer funding.

An exact rollout date is not certain yet, but testing will commence in 2020.