PORT JERVIS – A decades-old used car showroom and structure established by Gene and Elaine Clark in 1957 was destroyed by fire on Wednesday, October 9.

Dozens of spectators lined the smoke-filled streets surrounding the burning building as firefighters arrived in several trucks and fought the expansive blaze on busy Kingston Avenue at Hamilton Street.

The call came in at about 11:20 a.m., through Orange County’s 911 center.  A caller reported smoke coming from a garage on the site.  By the time fire units arrived just minutes later, the entire back portion of the building was ablaze, with wind fanning the flames as it quickly spread from back to front, and across the width of the building.  For a time, the flames appeared to threaten nearby houses that were being protected by fire apparatus and firefighters with water trained on the fire. 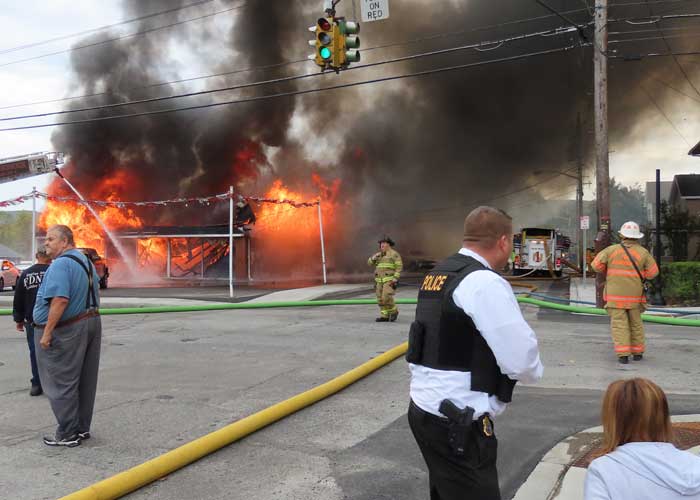 Thick black smoke filled the fire scene and extended throughout neighborhoods as multiple fire departments arrived on scene.  Water was pumped from all sides, with aerial streams into the building.

Two of the daughters of Clark Motor’s founders were on scene, visibly shaken at the loss of a business founded by their father so many years ago and recalling memories made there as they grew up.

The building most recently housed Auto Dreams, a car dealership operating from the 73 Kingston Avenue building that housed Clark Motors for so many decades prior.