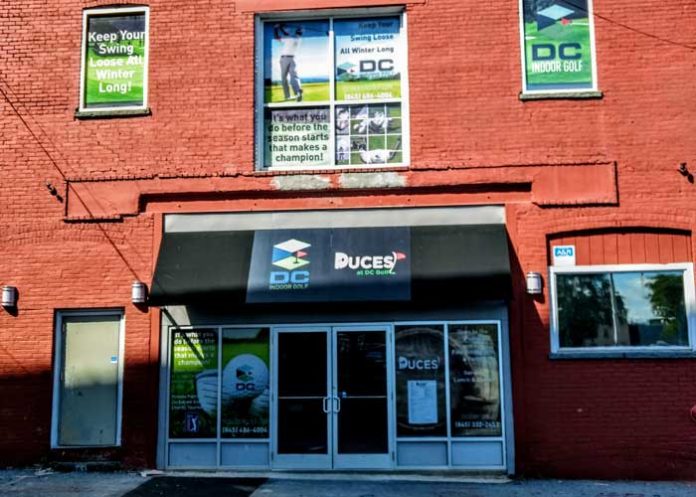 POUGHKEEPSIE – A local business owner is once again investing in the City of Poughkeepsie by opening up a new restaurant.  Dan Pizzarelli plans to open Duces at DC Golf this week at his building located at 10 Crannell Street, next to the historic Chance Theater.

Pizzarelli opened DC Indoor Golf at the location a few years ago.  The facility started with four PGA golf simulators, a bar, and a light menu.  At the time it was the area’s only location that allowed golfers to play simulated golf during the winter months.  As demand grew, the business owner added five more simulators on the second floor of the building to keep up with demand.

Since then, Pizzarelli has opened DC Sports on Route 9 in Wappingers Falls.  It had previously been known as Fun Central and included miniature golf.

Pizzarelli has added his popular indoor simulators at that location, which has allowed him to move some of the demand from Poughkeepsie to Wappingers Falls.  The move also allowed Pizzarelli to remove the ground floor simulators, keeping the five on the second floor, freeing up space for the creation of the new restaurant.

Pizzarelli has put tens of thousands of dollars into remodeling the Crannell Street location creating Duces, which will feature French-American cuisine with an Asian flair.  Executive Chef Max Ecker will be assisted by Sous Chef Shaun Miller as they prepare for the soft opening tentatively scheduled for the middle of this week.

The restaurant will also have a bar featuring a large selection of bourbon and whiskey.

The restaurant seats 60 patrons and will create 15 to 20 new jobs, according to the owner.

“I am investing here because I have seen substantial evidence of the city’s growth and revival,” said Pizzarelli.  “My original investment with the purchase of 10 Crannell Street and creating DC Indoor Golf has proven to be very successful.  At that time, Poughkeepsie was just starting to show signs of life,” said the owner.

Pizzarelli said investors have taken notice of the renaissance of Poughkeepsie and he is positioned to take advantage of the revival.  Pointing to plans by developer Ken Kearney, builder of Queen City Lofts, to build apartments across the parking lot from 10 Crannell Street, that encouraged Pizzarelli to expand his portfolio in Poughkeepsie.

Mayor Rob Rolison weighed in on the plans, saying “Mr. Pizzarelli’s latest investment is evidence of Poughkeepsie’s positive growth.  The city is attracting investors like Kearney and Pizzarelli who share our administration’s confidence that the city is on the right track.”

Additional information about the restaurant can be found at ducesny.com.

Telephone crooks still at it, this time over O&R bill payment...