KINGSTON – As protesters gathered around the planet Friday to voice their concerns about the environment, dozens gathered in the Kingston City Academy Green Park to add their voice to the cause.

“I show up at most rallies that are here,“ said Checko Miller. “Today’s important because as my son would say, we are running out time. This is our last chance to save the planet.”

Miller arrived early to assemble signs, placards that were popular with many participants who attended the rally. Miller, though was optimistic grass roots action and voices from the masses may prevail in this struggle

“It’s dwindling, but action creates hope,” he said. “If I give up hope that means the bad guys win, and I cannot accept that.

John Morano also attended the rally, and brought a flag of the Earth seen from space as a solitary planet.

“I am here because I am concerned about the climate and Earth,” said Morano. “I am not one to be out there, but I think it is getting to the point that it’s very serious.”

And apathy, he said, by sitting at home and waiting for solutions is not going to solve our problems at this time.

“For myself, it’s just a sense of empowerment to do something,” he said. “So I think being out here helps. 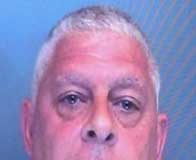