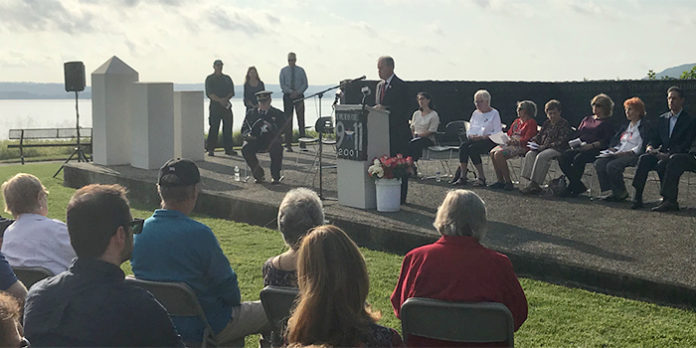 HAVERSTRAW – Rockland County marked the 18th anniversary of the September 11, 2001 terrorist attacks with a memorial at Haverstraw Bay County Park.

“Each year on this day we come together, reopening our hearts to the emotion, the fear, the anger and the pain, we felt that bright Tuesday morning is not an easy task,” said County Executive Edwin Day. “But it is a trial of will that we must undergo, we must remind the families of those who were lost that day that they are not alone and will never be alone.”

It is expected that by the 20th anniversary of September 11, more people will have died from post 9/11 illnesses than the almost 3,000 who died in the attacks that day. Day made special mention of those who have died due to those illnesses. “While I am thankful that the US Congress passed, and the president signed the bill providing increased funding to the September 11 Victim Compensation Fund, we must continue to stand by those who lost loved ones on that day and those who have since passed.”

City of Newburgh has highest municipal unemployment in region