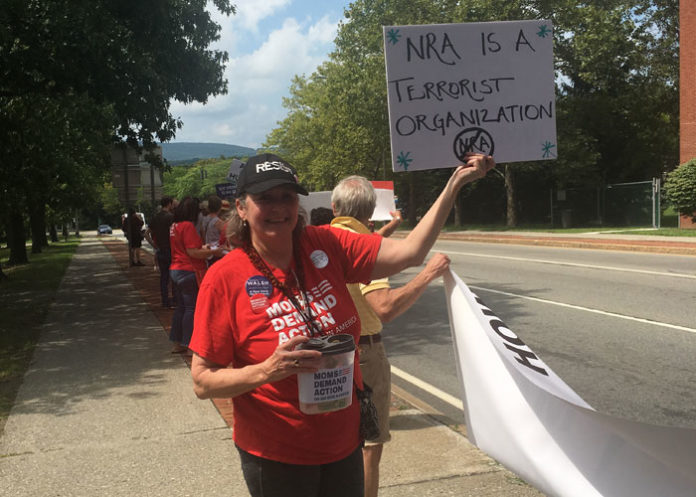 POUGHKEEPSIE — Moms Demand Action of the Hudson Valley, along with New Yorkers Against Gun Violence and Hudson Valley Stands Up, held a rally for gun law reform on the corner of Market and Church Streets in Poughkeepsie in the wake of the recent El Paso, Texas and Dayton, Ohio mass shootings.

Tara Langworthy, a member of Moms Demand Action since 2012, joined because she grew up in Sandy Hook, Connecticut, the site of another headline-making mass shooting.

“I never felt so welcome in a neighborhood in Sandy Hook,” she said. “When that happened, it shattered me. People I loved were affected, and I had to find a way to get active.”

The rally comes as President Trump has declared support for red flag laws across states, which prohibit those who are a danger to themselves or others from purchasing a gun. His comments have been met with ire from second amendment advocates.

“It may just be the fact that one of [the shootings] was inspired by the political rhetoric, and it’s shaking some of the people that were solidly against gun laws,” she said.

Local conservative leaders did not show up at the rally.

Democrat Joe Ruggiero, who is running for Dutchess County executive against incumbent Marcus Molinaro, said he wished both Molinaro and Poughkeepsie Mayor Robert Rolison would be in attendance. While he did not accept money from them during his bid for governor of New York last year, Molinaro has an A rating from the National Rifle Association, the largest gun lobby in the country.

“I think there are opportunities for folks to change their mind,” Ruggiero said. “You could support gun ownership and gun safety legislation. We need action now.”

Speakers at the event included State Assemblyman Jonathan Jacobson (D-Newburgh), Poughkeepsie resident Debra Henderson—who lost her son to gun violence in 1995, and Hudson Valley Stands Up founder Sabrina Goldfischer—who will be attending Harvard University in the fall after graduating from Arlington High School.

“The time for thoughts and prayers is over,” said Jacobson. “The time now is for action on a national level.”

“I belong to a club known as the walking wounded, a club no one wants admission to,” said Henderson of her loss. “I say no more to just wringing our hands, and then no action until the next shooting.”

“Incidents like those like El Paso and Dayton will continue, unless we approach this issue on a national front,” said Goldfisher. “We hope you will take your anger and heartbreak into the voting booth.”