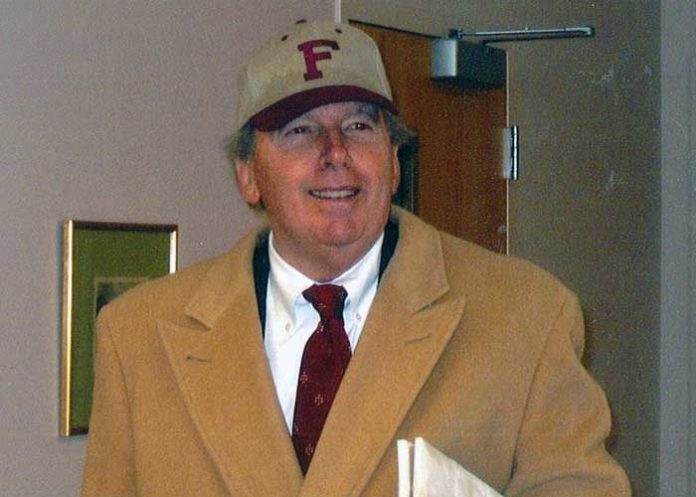 KINGSTON – A Mass of Christian Burial will be held at 10 a.m. on Wednesday at Saint Mary’s Church in Kingston for Edward “Ted” Feeney. The retired Kingston City Court judge was 80 at the time of his death on Friday, July 26.

Feeney, a life-long City of Kingston resident, began his education at St. Mary’s School in Kingston and graduated from Kingston High School. He then went on to graduate Fordham University and Albany Law School where he received his Doctorate of Law. While at Albany Law School he served as president to his senior class. Known as “The Leader,” Feeney began his life-long legal career at Rusk, Rusk, and Feeney, (from 1963-1974), then formed a lengthy partnership in 1972, with his friend and colleague, The Honorable J. Michael Bruhn until 1988.

He was law clerk to Judge Frank Vogt for close to three years, and in 1982, he was appointed Special City Court Judge in Kingston, by Democratic Mayor Donald Quick (although Feeney was a life-long Republican) until 1994.

As part-time judge, he continued to practice law until he was elected full-time city court judge in 1994. He ran for the position in 1994 and again in 2000, both times unopposed, and endorsed by city Republicans, Democrats and Conservatives, and by the Kingston Police Gold Shield Society.

His campaign committee included a bipartisan team including former Mayor T.R. Gallo and former Mayor James Sottile, then Alderman-at-Large. Feeney valued people his entire political and professional career as he did in his personal life; and all people, regardless of party, color or religion stood with him. His first campaign motto was “Firm but Fair.” Additionally, he served for six years as counsel to former State Assemblyman H. Clark Bell, and was an integral component to Congressman Hamilton Fish, Jr.’s successful election to the United States Congress.

Judge Feeney retired from the city court bench in 2007 and went on to become a state judicial hearing officer, serving in Ulster and Greene counties for the next few years until he retired for good.

Of all his professional accomplishments, he was most proud of “his baby,” The Ulster County Regional Drug Treatment Court created in September 2001. Feeney believed there was a need for treatment alternatives for repeat non-violent offenders with drug and alcohol problems. Drug Court was designed as an alternative to incarceration which he felt strongly about. His motives behind Drug Court was his deep care for people, and his belief that most addicts and alcoholics should be given a chance to get help and treatment, which included an opportunity to turn their lives around.

Feeney received the Founder’s Award in 2005 for his leadership in and dedication to his community by the State Assembly.

The Feeney family will receive family and friends on Tuesday from 3 p.m. to 7 p.m. at the Joseph V. Leahy Funeral Home, 27 Smith Avenue in Kingston. A funeral procession will form on Wednesday at 9 a.m. at the funeral home and proceed to the church.

Burial will follow in the Feeney family plot in Saint Mary’s Cemetery.

Regulation of CBD remains in limbo